I remember after new year tweet-up in Kolkata, Kuntal has loads of pictures and he called up on all of us asking to tag whoever we know which was a heavy work. The problem with tagging is you need to repeat it with every picture after you have finished uploading the album. In short Facebook doesn’t have a face recognition technology which will auto tag all your friends if you have done it at least once but luckily Viewdle does have.

Viewdle is a Facebook Album Up loader with face tagging as one of its core feature which means when uploading an album, it an analyze all your pictures for faces and ask you to tag it once and when you tag one of friends it will go and find the same friend in all the photos and automatically tag them. Loads of work done in less than a minute. Once you upload the images, the friends will be automatically tagged inside them.

Before you start using this app there is one thing you should know. This app needs user input i.e. you to teach who is who which is important as images taken from different angle are treated as different person but once you clear the apps doubt it remembers. You will realize this when you upload images second time and you have common friends which were in the same album.

Below is small video demo : ( Direct link to YouTube Video )

Once you install the application on your computer, you will have to give this app permission to access your Facebook data like photos and your basic information. Done that drag and drop images inside it which the app will analyze. Then it : 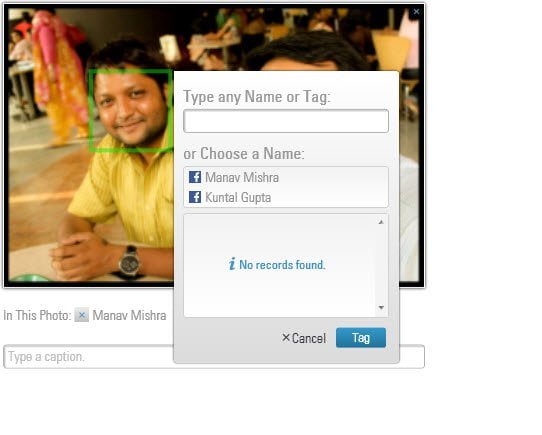