When fixing errors on your PC, SFC and DISM are two of the most used utility tools. These built-in diagnostic tools in Windows let you fix typical Windows problems like a slow PC, a computer acting strange, missing system files, and more. However, the question is among DISM and SFC, which and when you should run to fix Windows PC. Should you use both of them? Or running a single utility tool would be enough?

What are DISM and SFC Tools?

DISM stands for Deployment Image Servicing and Management. It is a command-line tool shipped with Windows by default. It runs through the command prompt or Windows Terminal-like applications.

The main job of DISM is to scan your Windows PC to find and restore potential issues that may impact the operating system. It serves and prepares the image used for Windows setup, PE, and Recovery Environment (RE).

SFC stands for System File Checker. It is also a built-in tool into Windows that is designed to scan for all the Windows system files, including the protected files, and check if any of them are corrupted. If the tool finds any corrupted system files, it will replace the damaged files using a cached copy.

These cached files already exist in the Windows system under a compressed folder, i.e., the copies available within the component store of Windows. SFC will look for those files and selectively replace the corrupted ones. 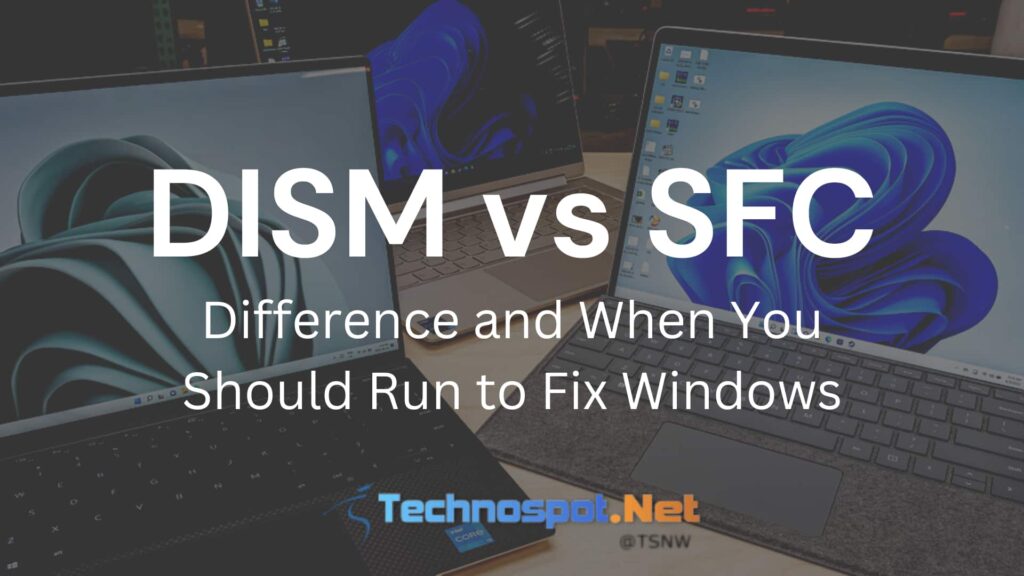 When Should You Use DISM?

DISM is considered one of the most powerful utility tools in Windows systems. Although, the SFC scan will fix most of the errors. But when it fails to do so, you need to initiate DISM.

When Should You Use SFC?

SFC is meant for finding and replacing corrupted files, so one should use it when their PC crashes. Or getting any messages related to missing DLL files, system files, or you are experiencing the Blue Screen Of Death error.

Once you run SFC, it will perform a full scan of your PC and try to repair and replace any DLL or system files from the Windows component store.

Please read our detailed guide on how to use SFC /scannow to repair Windows PC.

Should I run SFC or DISM first?

System File Checker should be your first attempt at fixing your PC. It will check for system file corruption of all the system files, including the protected ones, and perform a repair. If it fails to repair the damaged or missing Windows system files, then only you should use DISM.

Is It possible to use SFC and DISM in Recovery Mode?

So that was all for DISM and SFC. Both the tools work the same way: scan your Windows system for corrupted files and replace them with new ones. However, SFC replaces corrupted files using a cached version, while DISM uses the internet to download and fix the component store of Windows.