Looks like Smartwatch area is picking up and during 2013-2014 we will be looking at many such smartwatches. Today I discovered another Kickstarter project and its called as Hot Watch which are providing something unique of their own. 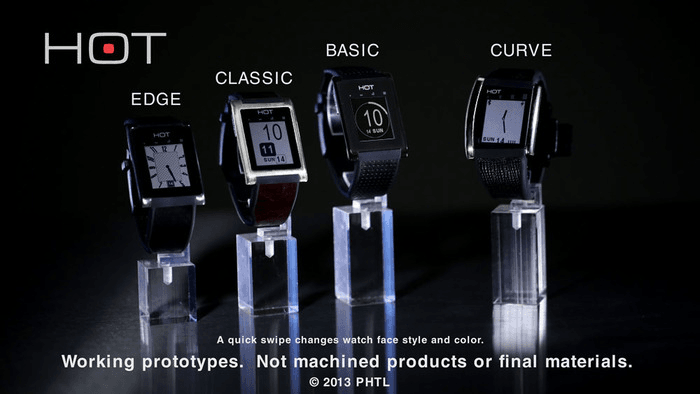 Lets check out the features:

Most of the smartphone allow you to take up calls and have the conversation over speakers which makes sure if its a private call you either will take out your phone from your pocket or reject and send a buys SMS.

Using their patent pending design, Hot Watch has a microphone & speaker right where you clip the belts. So when a call comes in your hold your palm over your ears and listen to the calls. The palm makes sure that the directional speaker reflects and amplifies to the user’s ear, making private call possible.

So guess you will be looking funny when you have no phone in your hand but have your palm over your ears for calls. Human I guess!!

There are two types of gestures here. One that you control with your wrist movement and second that you can do on your smartwatch screen. Yup you guess it right, the screen accepts touch response.

This is another feature which will be common to watches. We have our watches on no matter where you are, even on your bed. Well its not going to rain when you are at home but its quiet possible that you can get wet in rain. Hot Watch is water proof, but how much is still has to be answered.

Which Phone OS it will work with?

Technically it should work with every other phone which supports Bluetooth. However the makers are more inclined towards Android and iPhone and have no words on Windows Phone. This is something which we really appreciated about Kreyos.

Hot Watch must be the first smartwatch which is providing different type of models. They have four in place — Basic, Classic, Edge and Curve. The last model is equipped with flashlight.

There is no wording on apps and m any other questions.

Hot Watch houses an Energy Efficient Cortex M3 processor with Secondary DSP processor for Bluetooth 4.0, Call control and Audio Enhancements. It has 6-Axis Accelerometer and Gyroscope which makes sure all gestures are supported. If you look at the display its monocolor 1.26” E-paper display which is Multi-touch capacitive screen. It is also anti reflective glass with high contrast making sure its readable when you are in bright sunlight. From development perspective they have a SDK for custom 3rd party applications and there is a planned over the air firmware update.

Convinced Enough? Here are the plans for development and shipment:

You can start supporting them on Kickstarter right here