The concept of accessing the news sources on the mobile devices like smartphones, tablets and eBook readers is picking up at a very fast pace. There are several factors which are make this concept a hit, like the portability issue, now just to get updated on the news while traveling you no more need to carry that bundle of papers (newspaper) with you, going through the news on the way to your workplace not only allows you to grab on your daily diet of news and updates but also helps you to keep away from the boredom. According to this infographic as well, this can be clearly made out that the trend of reading the newspapers and accessing the other news sources on the mobiles is growing pretty fast.

Well, here is a list of news apps, the apps which will allow you to stay updated on news via different news sources. This list has the apps for Android devices. Most of the apps featured in this list are the free ones, and have been already featured on this blog –

Probably, one of the most read English daily in India, has been a popular and trusted news source for the Indians, has recently launched the ‘Times of India’ app for Android, BlackBerry, iPad and iPhone. The Android app has tabs on the top, which work as categories; tap the category you want to access to get the news from specific domains. Comes with a sharing facility, share via email, SMS or on Social Networking sites. Read full review of ‘Times of India’ app for Android and other devices.

Ok, if you don’t want to read, and want the daily dose of news updates via the videos, this one is for you, from one of the most trusted and well-known news source, CNN. CNN app for Android is awesome, works great; I have been using it lately. This too has everything you wanted in your news app, allows you to access the stories with the help of categories view, it has ‘Top Stories’ section, later the categories based upon region like ‘U.S.’, ‘Africa’, ‘Asia’, ‘Europe’, ‘Latin America’, and ‘Middle East’, and after this you get to see the categories like ‘Business’, ‘Sport’, ‘Tech’, ‘Entertainment’, and ‘Travel’. Sharing option is there; also the app allows you to access the CNN Radio as well. The best thing about this app is, before you start viewing the video, it gives you a short description of the news, so that you can make up your mind about viewing the video, and decide if you want to continue viewing or will like to move ahead and watch something else. Read More about the CNN app for Android.

An app which allows you to access the Google News, which in itself is not an independent news source, but an aggregator, and as the name says, this Android app brings you the news from the region you are in, though it automatically brings your region specific news, but if you want you have the options to toggle between ‘Auto Region’ and ‘Select Region’ options, hence you can get the news from almost any region. Here is a snapshot of this app, have a look – 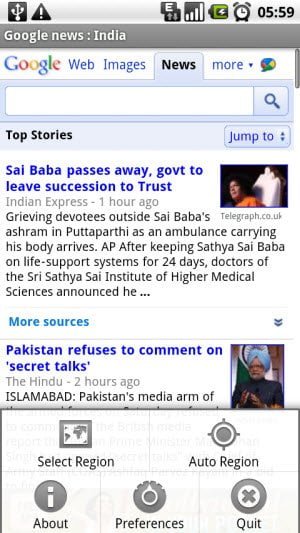 Once you tap on an article and want to read the full story, it takes you to that specific webpage where the story is originally published. This app is great if you are not very specific about the news source, and would only like to have a news aggregator. You can download and install Google News (regional) from the Android Market.

So, far the apps mentioned in this list are the Free ones, there is another app, which isn’t Free but as long as you love reading newspapers, and probably like to read more than one newspaper a day, this app is for you, named as PressReader, is an awesome app for Android devices which allows you read almost any popular newspaper across the world. Saying that the app is not free won’t be a true statement, actually the app is free, but later you need to buy the subscription to get the newspaper on your device. You can read the full review of PressReader app for Android, however there is an awesome feature of this app, which can’t be left unmentioned, that is, you can actually listen to the articles in a newspaper, just like a podcast, and also the interface is designed in such a way that it gives you the look and feel of the printed version of the newspaper.

So, go ahead a choose a News app for your Android device, as of now this is the list, we will definitely keep updating this list as we come across more apps, there are several other apps available in the Android Market, but I haven’t tested them personally as yet, hence will keep updating this post as soon as I try them out. You can bookmark this page so that you don’t miss on the new entrants of this list.

How to Remove Pin From Your Account in Windows 11/10