Planning to send bulk emails from your personal Gmail Account? Did you know users report emails from the same email account as spam? When you go through such a situation, Google will likely ban your account for known reasons. This post will attempt to answer if sending bulk emails from Gmail can get your account banned. We will also let you know the services you cannot access and how to stay safe against an account ban! 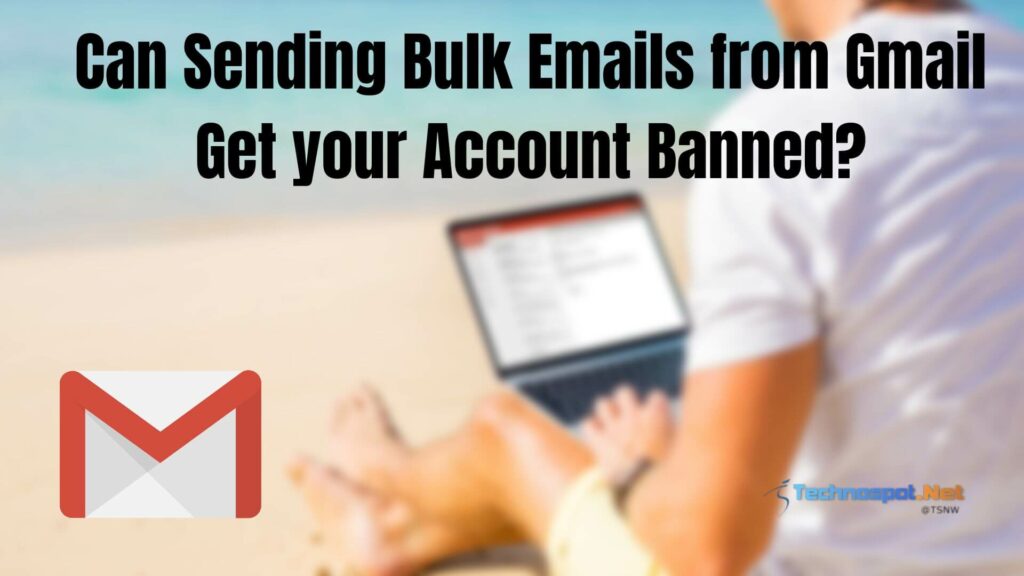 Yes, there are several reasons why Misusing Gmail bans your Google account. If you have spammed someone’s inbox, sent irrelevant promotional messages, or attempted sending bulk emails from Gmail, your account is Susceptible to ban. Even if you use it for having, sending malicious files, or trying to hack someone’s account, then you would exclude your account.

Further, if you try to harass someone in other ways, then Google notifies it. You cannot use Gmail for illegal activities. Thus, Misusing Gmail would lead to an account ban.

Apart from that, what other reasons are you likely to suffer a ban? Let’s roll onto the next section to find out!

What Is Gmail’s Daily Limit on Sending Email?

When you send over 100 emails using an app such as Outlook or anything connected through includes email sent through smtp-relay.gmail.com or smtp.gmail.com servers. Your account will deactivate for 24 hours.

If you send emails to 500+ users using the Gmail website, then Google will disable your account for up to 72 hours. This limit is 10000 email recipients daily for Google Apps or Workspace users.

When using  Gmail Mail Merge, the upper limit is 100 recipients per day for the usual Gmail accounts and 500 per day for paid Google, i.e., Google Workspace.

Further, if you use extensions to bypass Google’s security features and install a bot from accessing Gmail, you will likely suffer a Google Account Ban.

No, if Google has banned your account for Misusing Gmail, you should know what to do next! More details are here.

After logging in, there’s a probability of recovering your account when you press the Try to Restore Button. You will be prompted to follow a full-fledged process that will help restore your account. But if you can still do so, you can connect with Google Support to tackle the issue. Later, you have to follow an online form about the same, and Google will get back to you in a few days.

As a precaution, downloading files from photos, Drive, and Google Workspace at regular intervals is a good idea and also avoids mishaps.  If none of the ways work out for you, and you feel that you have done nothing inappropriate, then you can try again or take it over social media for Google to change its decision.

But what consequences will you suffer after a Google account ban?

Waking up to a Google Account ban is one of the most terrible experiences ever. Things become more complicated if you own an Android device like a smartphone or if you are a Chromebook user. This is because Android and Chrome OS rely upon Google Accounts for most of their functions. In case of an account ban, you cannot use most device features. So, be it syncing contacts and emails, having media or files, or downloading apps, everything is complicated.

So, you will have to create a new account in such a scenario. However, you will not be able to retrieve your data. This is because Google has several services, so an account is needed to access them! So if you use Chrome, Drive, Photos, Gmail, Keep, Docs, Slides, Sheets, or even YouTube, then you cannot use them.

Yes, you heard that right! Even if you are an Android user, you cannot download apps. Besides, even if you have a UPI, Google Pay would be unavailable! Things become worse if you have an AdSense account, and you will suffer financial losses.

You never know if Google Bans Your Account. However, you will likely be devoid of its services, and to keep yourself safe, you can take some precautionary measures.

Securing your data is of utmost importance!

If you thought Can Misusing Gmail Get your Account Banned, you would have got your answer. When you execute any activity from your Google account that violates its terms of service, your account is bound to a ban. Even if you use Incognito Mode, that will not keep you safe. If your account is blocked, you cannot access Google’s services. In such a scenario, you can set up another Google account. Doing so in advance protects you against a ban, and you can back up your data in advance to stay safe against a ban.

How Can I Prevent My Gmail Address From Being Misused?

You can prevent your Gmail account from being misused by not signing in to someone else’s device. Besides, you should create a strong password and not disclose it to anyone. Finger, make sure not to save the password with a browser. You should even timely change the password to avoid its misuse. Securing your account with two-factor authentication helps further.

Why Was My Google Account Suspended for No Reason?

When you do anything that violates Google’s Terms of Service, it will ban your account. You can check under what cases your account would get banned to determine the cause. If you still feel that you have not done anything, someone will have misused your account.