Xiaomi entered the Indian market last year with the Mi 3 and have since then managed to ship 1 million handsets in the country in only 5 months. The company’s mantra of selling top-notch hardware at a low-price have made them a winner in the price sensitive Indian market.

Xiaomi sells only one product in India at any given point of time via weekly flash sales for a couple of months, after which it phases them out. The company has successful sold lakhs of units of the Mi 3 and Redmi 1S by employing this technique. 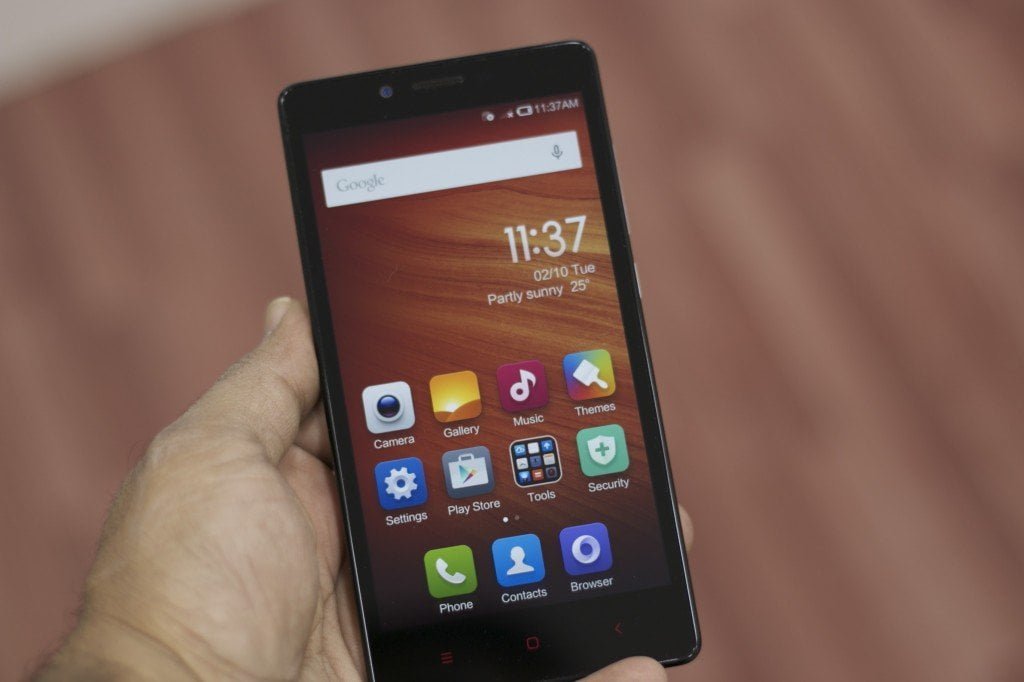 Recently, the company phased out the Redmi 1S in favour of its low-end phablet — the Redmi Note. This is the first “phablet” that Xiaomi has launched in the Indian market and the company is selling it in two variants — 3G and 4G. There are quite a few differences between the two variants of the device that you can read over here. For now, scroll below to read the review of the Redmi Note 4G.

If you have ever used a Xiaomi device before, you will not be surprised when you hold the Redmi Note in your hand for the first time. If not, prepare to get pleasantly surprised. For its price, the build quality of the Redmi Note is absolutely stellar. Even though it is made up of plastic, it does not suffer from any creaking issues, which is generally found in plastic clad phones from Samsung. 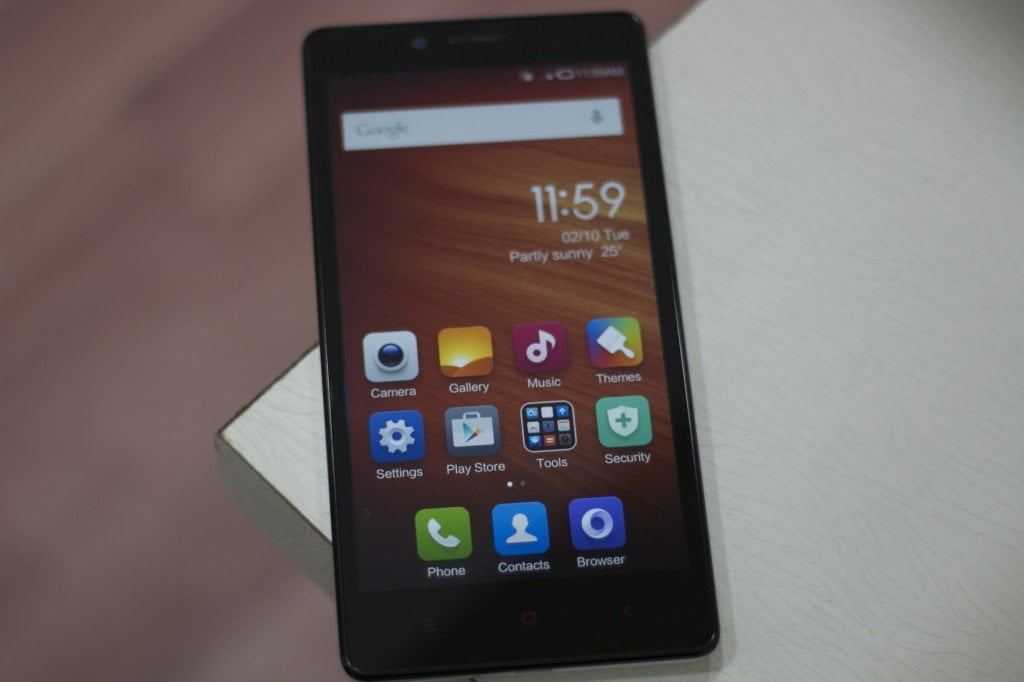 The front of the device is dominated by the 5.5-inch large 720p display, which is protected by Corning’s Gorilla Glass 3. They are adorned by three capacitive navigation keys — Menu, Home and Back — at the bottom that glow in red.

The Volume and Power buttons are located on the right edge of the device, where they can be conveniently pressed. The buttons, however, are a bit squishy and don’t provide adequate feedback. The microUSB port is located right in the middle of the bottom of the phone, with the 3.5mm audio jack located on the top. The left edge of the Note is completely devoid of any buttons or microphone holes. 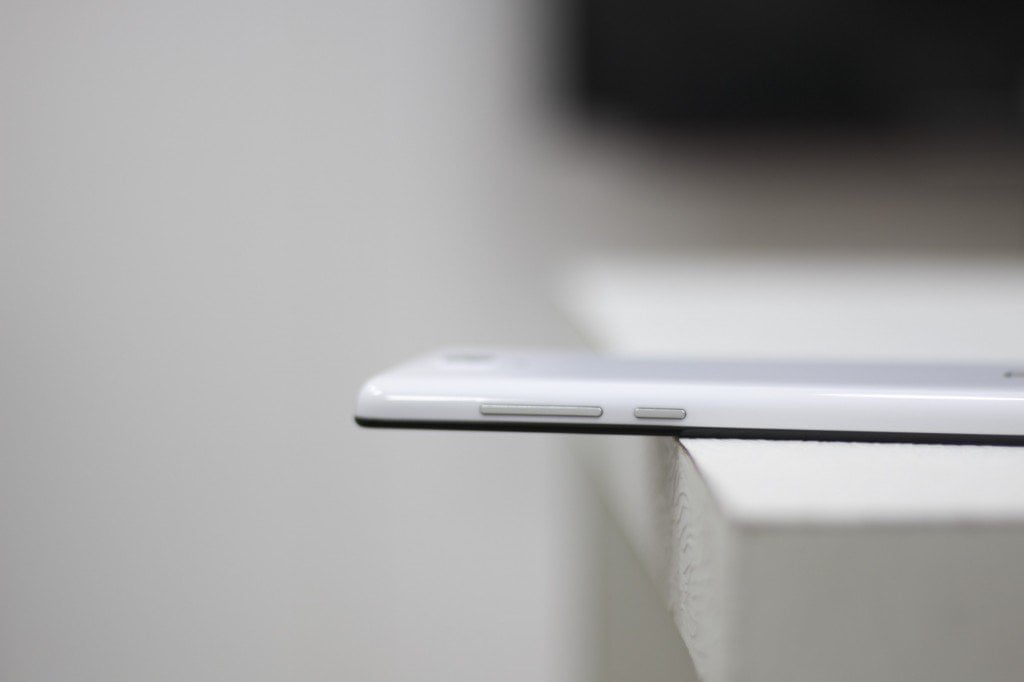 The rear of the phone is made up of a removable plastic back that has cut outs for the camera and LED flash near the top and a speaker grille on the bottom left corner.

The Redmi Note 4G sports a 5.5-inch 720p display that is protected by Corning’s Gorilla Glass 3. The display has a pixel density of 267ppi, which is on the lower end. However, until and unless you look very closely and have a perfect vision, you will not be able to spot individual pixels on the display. 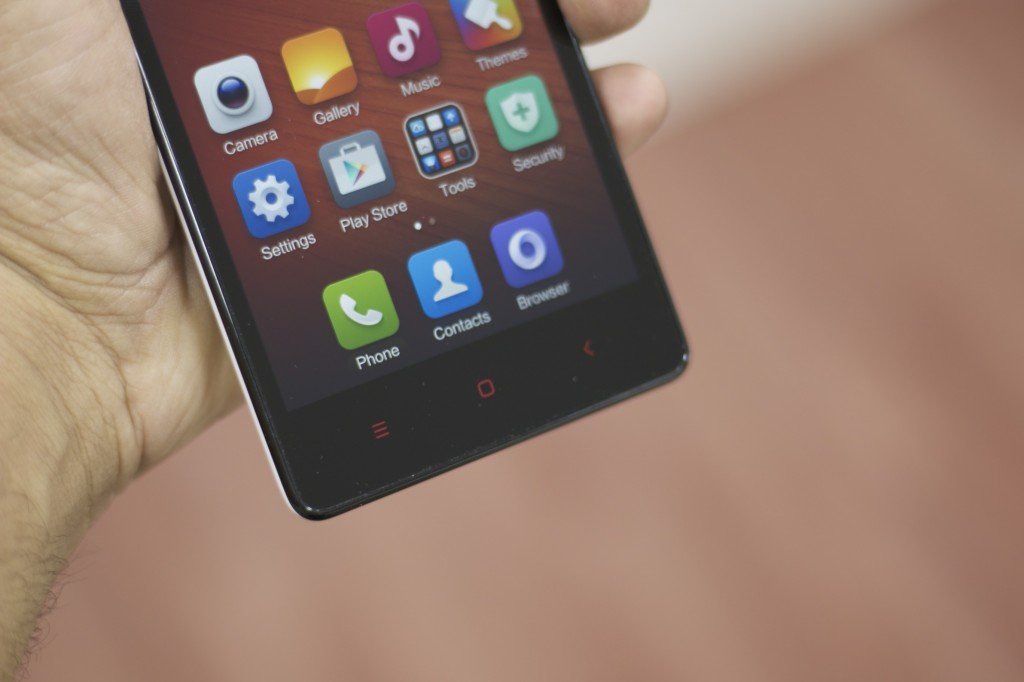 The viewing angles of the display are great and content on the screen remains clearly visible even when viewed from extreme angles — a rarity in smartphones that are available in this price range. The brightness levels are also more than adequate, though I found it a bit lacking in direct sunlight, where the poor reflectivity of the screen made things worse.

The Redmi Note runs on MIUI 5, which is based on Android 4.4.2 KitKat. However, the OS does not resemble Android closely and looks more like an offspring of iOS with all the pros and cons of Android. Compared to the likes of iOS 8 and Android 5.0, MIUI 5 looks and feels very dated. Thankfully, Xiaomi announced earlier this week that it will be bringing MIUI 6 to the Redmi Note 4G in early-February.

While Xiaomi offers plenty of customisation options and features in MIUI, the UI does not feel as bloated as Samsung’s TouchWiz. Some of the features included in MIUI are really handy and should be offered by Google in stock Android. This includes the ability to customise the notification toggles, the default system font, the vibration intensity and more. 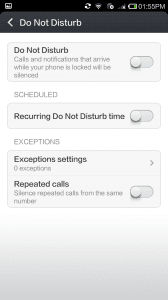 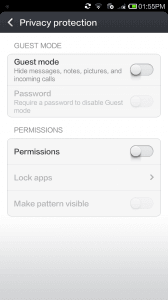 Below are some of the noteworthy features in the UI that will be appreciated by power users:

Permissions Manager: Unlike Android and just like iOS, MIUI also comes with a Permissions manager, which allows you to revoke unnecessary permissions used by your installed apps. The feature is a great way to prevent apps from unnecessarily accessing your contact book, reading your messages, accessing your location or even running in the background.

Permissions Manager can be accessed by going into Security Privacy Protection -> Permission.

Guest Mode: Xiaomi has also included a very handy Guest mode in MIUI. Once enabled, all your personal data including your messages, notes, pictures and incoming calls will be hidden, which allows you to freely pass your phone to anyone without worrying about them snooping into your personal data.

Do Not Disturb: Inspired from iOS, MIUI comes with a ‘Do Not Disturb’ mode as well. However, compared to iOS, Xiaomi’s implementation of the feature is slightly different. Simply enabling Do Not Disturb will automatically silence all the calls and notifications that you will receive while your phone is locked.

You can schedule a time between which Do Not Disturb will automatically enable itself and start silencing all your calls and notifications. There is an Exception list so you specify important contacts or groups, whose notification should not be silenced under the DND mode. Additionally, you can enable the “Repeated calls” feature to make sure when you receive a call twice from the same number within three minutes, the phone will notify you about it.

The Redmi Note 4G is powered by a quad-core Snapdragon 400 processor clocked at 1.6GHz. The quad-core chip is coupled with 2GB RAM and an Adreno 305 GPU. For its modest internals, the Redmi Note 4G performs admirably. For a low-end phone, the Redmi Note’s UI is loaded with animations. While the phone does skip frames every now and then while navigating through its UI, it is not as bad as other low-end phones from Micromax or even Samsung’s mid-range offerings that are infested with TouchWiz.

Performance while scrolling through heavy websites in Chrome for Android was slightly jittery. The Redmi Note 4G performed admirably while playing heavy games like Asphalt 8 and while it did heat up a bit, the temperatures were nothing to worry about.

The Redmi Note comes with a 13MP F/2.2 rear camera that is aided by an LED flash. The performance of the camera is mediocre at best, but again, better than any other smartphone in the same price range. 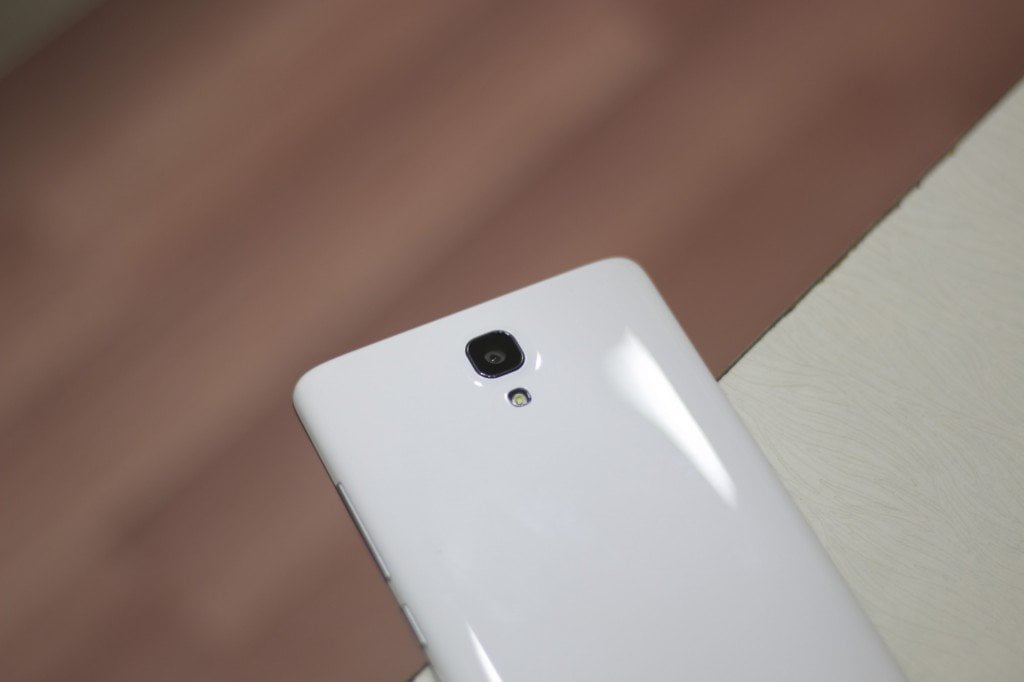 The camera is quick to auto focus, even in low-light, and most of the images you will shoot will be free of blur. In low-light, the images have a lot of noise, but that is a given considering the price of the smartphones. 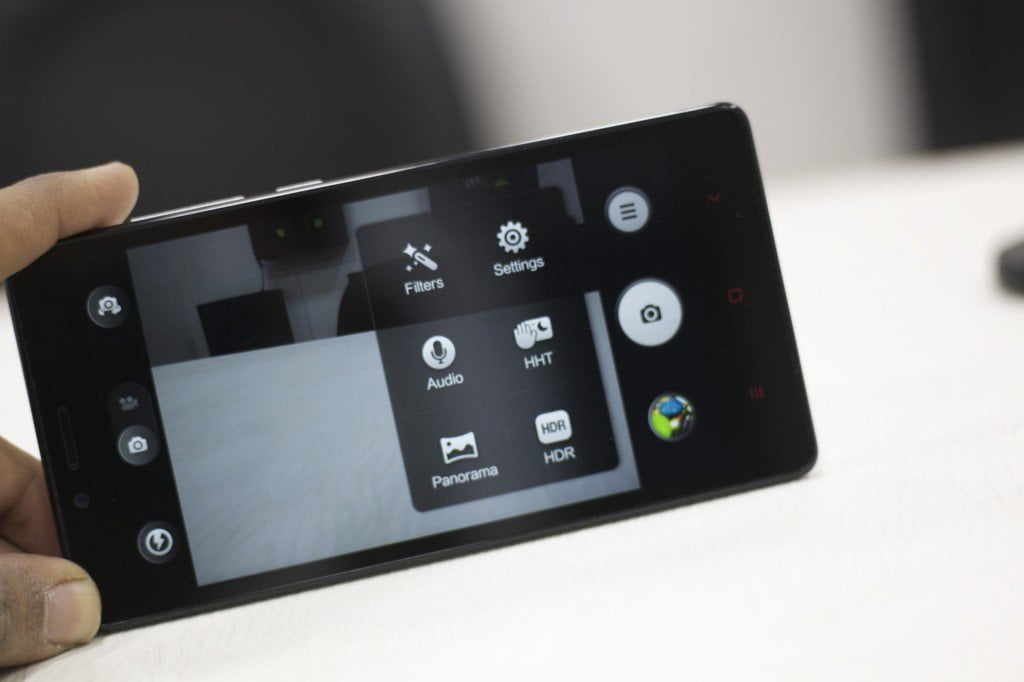 Below are a few sample images from the Note 4G:

The Redmi Note 4G can also record videos in Full HD resolution, something that not many low-end Android handsets can boast of. The videos are shot at 17Mbps bitrate and look pretty decent in daylight. However, as the light reduces, digital sensor noise and artefacts completely ruin the video.

Nevertheless, the overall camera experience on the Redmi Note 4G is better than even some high-end Android devices (hint: Nexus 6). It might not necessarily take better pictures than them, but the combination of a decent camera interface, low shot-to-shot lag and quick auto-focus make clicking photos on the Redmi Note a pleasure. 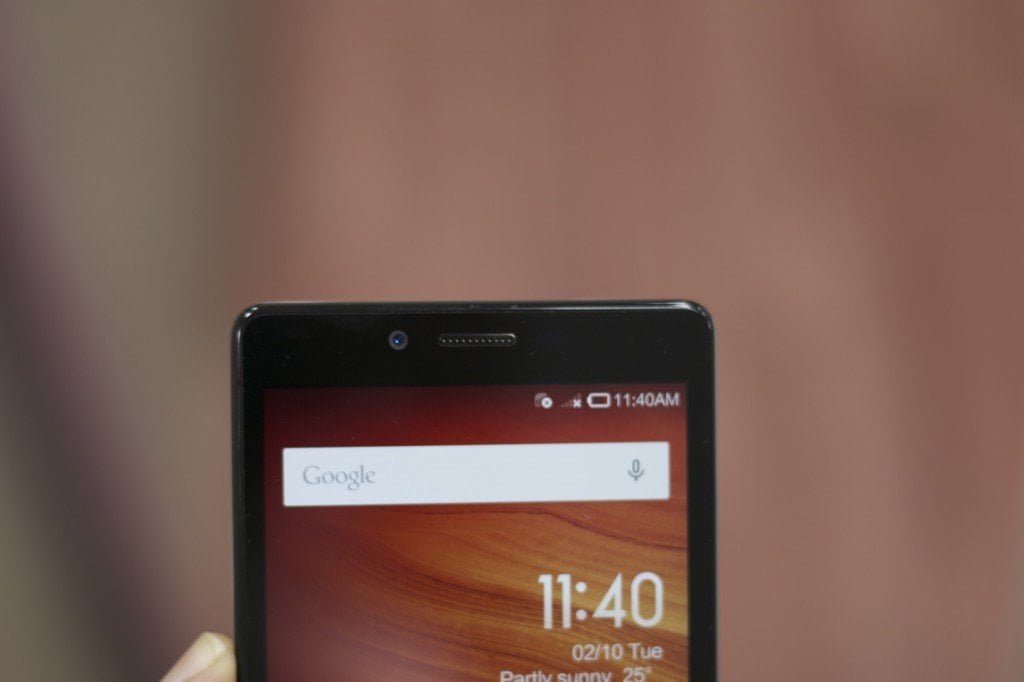 Xiaomi has used a 5MP sensor on the Redmi Note 4G in the front and the camera can take some stunning selfies. The wide-angle lens also helps a lot here and allows you to fit in more people in your selfies without using a selfie stick.

The rear speaker on the Redmi Note 4G is plenty loud to make sure that you don’t miss important calls and notifications even in noisy rooms. 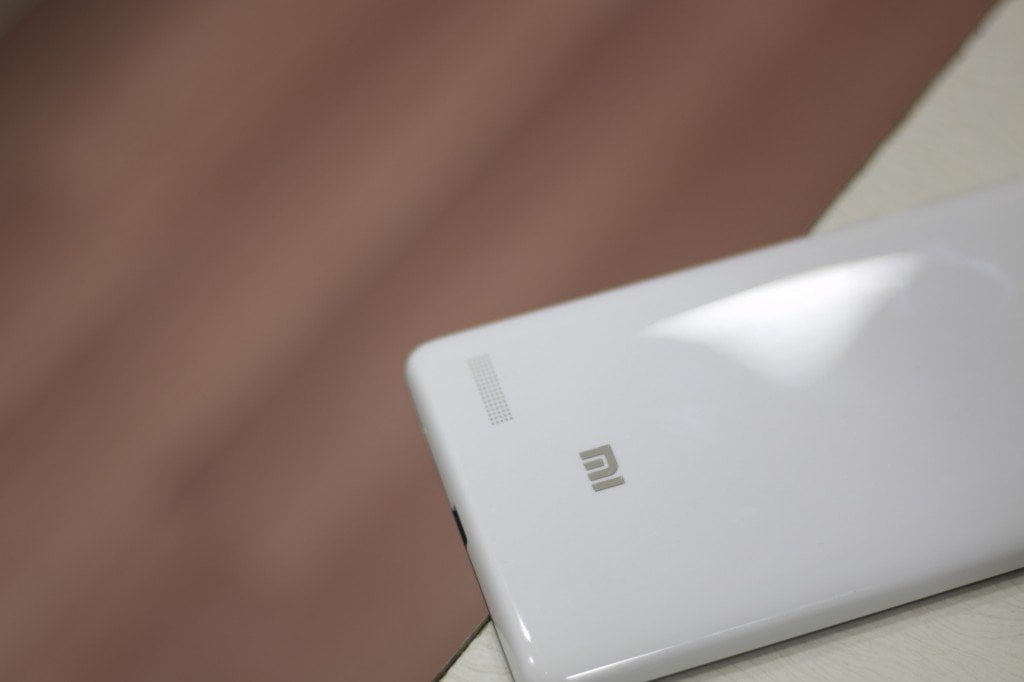 The Redmi Note 4G comes with a gigantic 3200mAh removable battery. This is bigger than what most high-end Android smartphones ship with nowadays and is right up there with the likes of the Galaxy Note 4 and the Nexus 6. When combined with its modest internals, the Redmi Note 4G is an absolute beast when it comes to battery life. I repeatedly got more than 6 hours of screen-on time over a period of 1.5-2 days. With the Redmi Note 4G, battery life is going to be the least of your concern.